From hiking the UAE’s highest peak to snorkelling with turtles, here are our favourite things to do near the capital

activity
A car lover's guide to Abu Dhabi
Travel guides
Five Abu Dhabi islands you ought to visit
Abu Dhabi
In search of the humpback dolphin In Abu Dhabi
Abu Dhabi
Sand And The City: A Long Weekend In Abu Dhabi

The city of Abu Dhabi has all you could possibly dream of. Yet, sometimes, amidst the glitz and the glamour, the outside world beckons, and with such a setting as the Gulf, it can be hard to ignore the many treasures just a day trip away from Abu Dhabi. Here are our favourites:

Al Ain has been enchanting its visitors for centuries. In addition to its historical buildings and prominent cultural heritage, the town is most famous for its oasis, an Eden-esque ensemble of almost 150,000 date palms. The oasis brings the desert fantasy to life, as the Abu Dhabi sun is blocked by the gently swaying branches of thousands of palms and cool breezes dance between their stalks. Underneath their blanketed cover, a luscious, fragrant air covers the ground, while the soothing sound of water, carried by traditional falaj irrigation channels, adds a further aura of peace and tranquillity to the atmosphere. If you’re lucky, an ethereal, jungle-like mist illuminates the streaks of sunlight cascading down, creating a timeless scene that has been enjoyed for thousands of years. 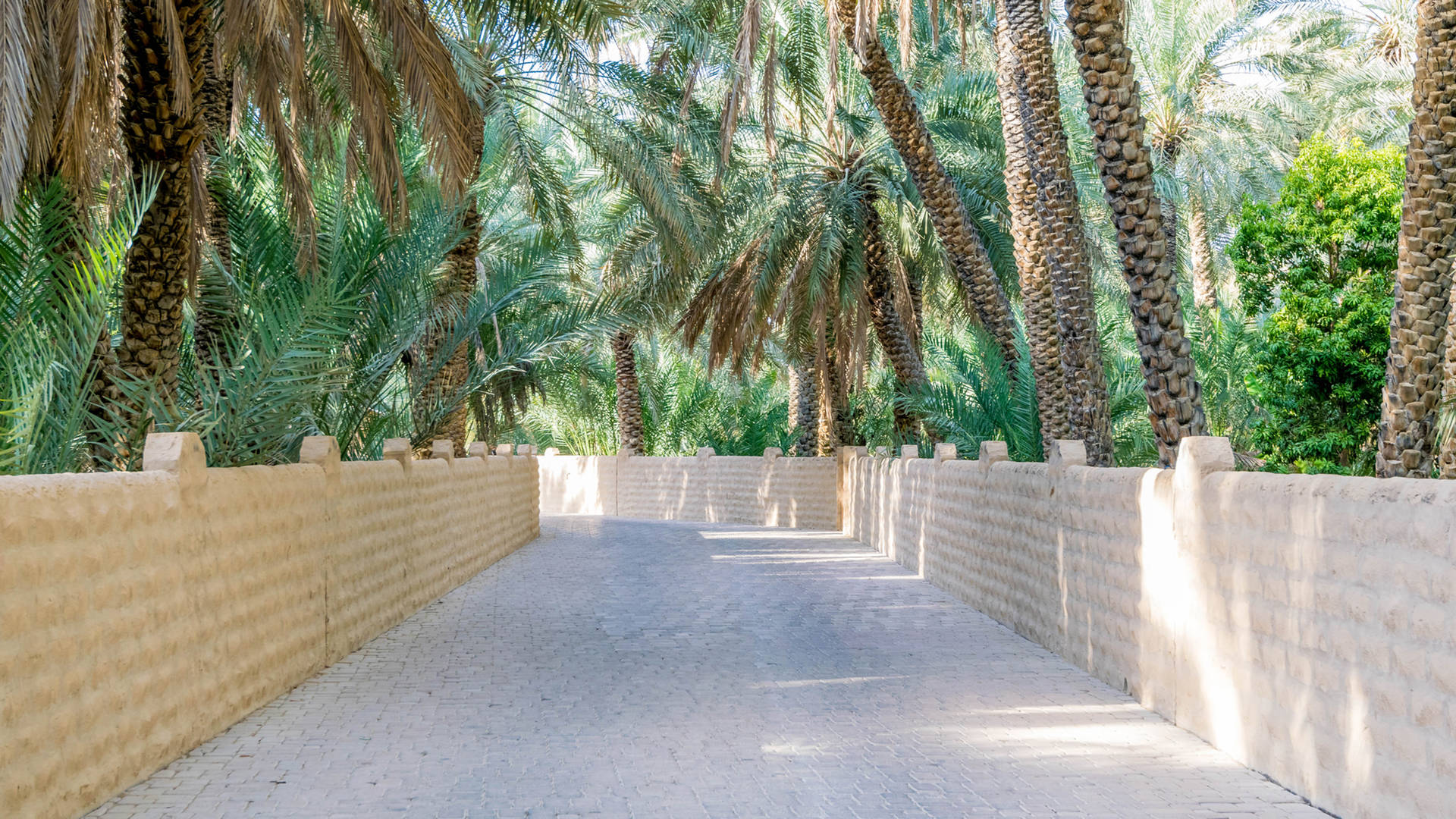 Slightly further from Abu Dhabi than Al Ain is the north-eastern Emirate, Ras Al Khaimah. Just under a three-hour drive, Ras Al Khaimah is well worth the voyage, as the Emirate is filled with white-sand beaches and breathtakingly rugged landscapes, all the while being less built-up and less traversed than the more famous western Emirates. For those seeking an active adventure, Jebel Jais, the UAE’s highest mountain, is laced with trails ranging from beginner to the technically advanced. And if you prefer the descent above the ascent, look no further than the world’s longest zipline, also on Jebel Jais, that soars its brave visitors almost three kilometres down the mountain’s stunning rocky ridges. For those preferring to stay at sea level, Ras Al Khaimah’s beaches have a watersports scene to rival any of Dubai’s, while its relatively uncrowded shorelines make for idyllic sunbathing and swimming.

The UAE’s second highest peak is just under a two-hour drive from Abu Dhabi. Rising over 1,000 metres, the ruddy rocks and snaking roads winding up Jebel Hafeet resemble the epic scenery of the Grand Canyon, while the view from its peak is the best in all Abu Dhabi, a perfect panorama spanning 360 degrees over the untouched, natural desert so emblematic of the Gulf’s rugged charm.
The road to the peak is scintillating for cyclists and drivers alike, as its magical views are matched by the difficulty of the drive upwards. And if the ascent is not enough alone to inspire you towards Jebel Hafeet, the mountain’s sides are home to over 500 ancient burial tombs, shaped like honeycombs, dating back over five millennia.

The easternmost Emirate of Fujairah is as naturally stunning as it is historically fascinating. Bordering Oman, its waters are some of the richest in the entire Gulf, with a scuba diving and snorkelling scene famous on account of healthy turtle populations and panchromatic schools of fish. Many of the region’s most spectacular marine species gather around the iconic Snoopy Island, which itself resembles a nesting turtle. On land, Fujairah boasts some of the UAE’s most historically rich remains, chief amongst them the 16th century Fujairah Fort, the rock and mudbrick walls of which are in pristine condition. The fort is famous in local history for resisting the British navy, who demolished one of its towers in the early 20th century. Also of note is the Fujairah archaeological museum, which holds one of the UAE’s most prestigious collections of antiquities.

The best place to spot wildlife in the UAE is without a doubt Sir Bani Yas Island, covered by the award-winning Arabian Wildlife Park. The island was the brainchild of Sheikh Zayed, the UAE’s first President, who developed it for wildlife as part of his ‘Greening of the Desert’ drive. The island is about three hours west of Abu Dhabi and is home to one of the world’s largest populations of Arabian oryx, the majestic, phantom-like antelope of the Middle East. Additionally, several of Africa’s most iconic species call Sir Bani Yas their home, among them cheetahs, giraffes, and hyenas. Safaris take place daily. Your Jumeirah concierge or private butler will happily arrange your visit.

Discover the many treasures just a day trip away from Abu Dhabi when you stay at Jumeirah at Saadiyat Island Resort.