The Dubai Turtle Rehabilitation Project aims to care, protect and rehabilitate sick and injured turtles, helping almost 2,000 sea turtles since its launch in 2004

For over a million years, sea turtles have filled a vital role in the balance of marine habitats. But nowadays, the sea turtle is under threat around the world due to loss of habitat, poaching, over-exploitation and pollution.

The purpose of the project

Jumeirah is fighting back, scaling up efforts to combat their decline. Jumeirah launched the Dubai Turtle Rehabilitation Project in 2004 at Burj Al Arab, in collaboration with Dubai’s Wildlife Protection Office, the Dubai Falcon Hospital and the Central Veterinary Research Laboratory. The project has since managed to rescue and rehabilitate almost 2,000 sea turtles across the UAE, with the help of environmentally conscious tourists and residents. Of the seven species of turtles swimming in the world’s oceans, five can be found in the UAE including Hawksbill, Green, Loggerhead and Olive Ridley. According to the International Union for Conservation of Nature the Hawksbill population is critically endangered.

‘The Dubai Turtle Rehabilitation Project is the only project of its kind in the region, and aims to care, protect and rehabilitate sick and injured turtles, while also raising awareness of the threats they face,’ Barbara Lang Lenton, Director of Aquarium at Burj Al Arab, explains. ‘We also educate residents and international hotel guests about the threats the turtles face and how we can help their local, and global, plight.’ 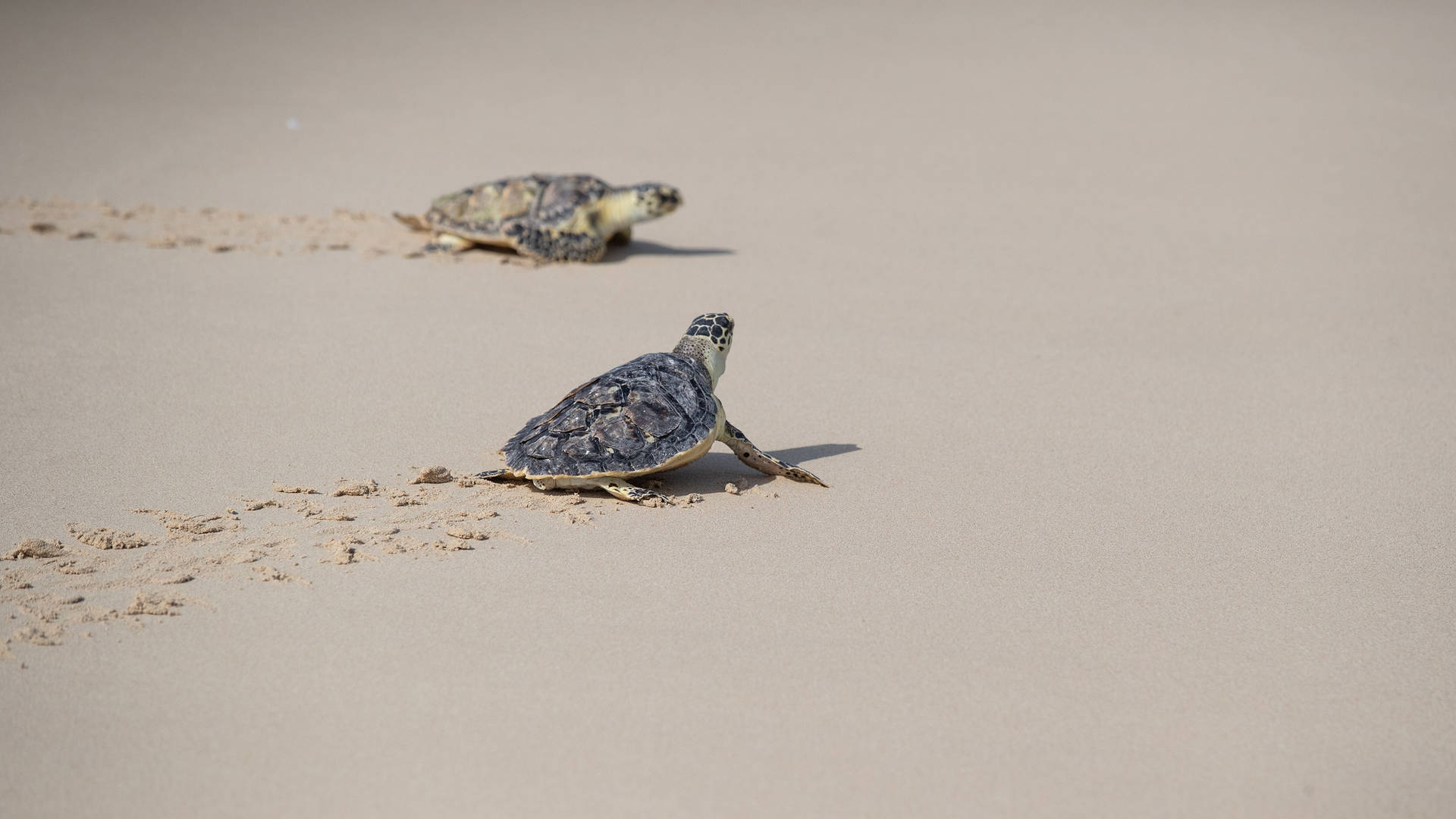 Some turtles are injured due to entanglement or ingestion of plastic waste discarded into the sea. Others are sick rather than injured, and usually show abnormally heavy barnacle growth on their shells. Additionally, young turtles suffer when the sea is colder in this region, therefore the sick turtles are taken into the sanctuary during the winter months of December, January and February.

Efforts are also well underway in Abu Dhabi, as turtles are rescued at Jumeirah at Saadiyat Island Resort, where the team take measures to protect turtle nests and help turtles in need on Saadiyat Island’s pristine and protected natural beach. The resort has successfully rescued and assisted in the rehabilitation of 250 juvenile Hawksbill turtles and has helped over 700 hatchlings make their way safely to the sea since its opening in 2018.

The 30 sea turtles released in June 2021, were each given extensive care through a comprehensive programme of veterinary examinations, administration of medication, surgical care where needed and consistent monitoring. Their injuries and cause for rehabilitation are due to cold-stunning during winter (a life-threatening reaction experienced by turtles when exposed to cold water for prolonged periods), plastic ingestion, and injuries requiring surgery. Once all treatments have been completed, the team then relocate the animals to the turtle lagoon at Jumeirah Al Naseem, to ensure their sustained positive progress, as part of the final stage of their rehabilitation.

How can you help?

Jumeirah encourages anyone who spots an injured or stranded turtle in the UAE, either in Dubai or Abu Dhabi, to get in touch with our team either at Burj Al Arab or Jumeirah at Saadiyat Island Resort. The hotel also encourages both tourists and residents to visit the sanctuary at the Turtle Lagoon at Jumeirah Al Naseem, to meet the rescued sea turtles before they are released back into the wild. 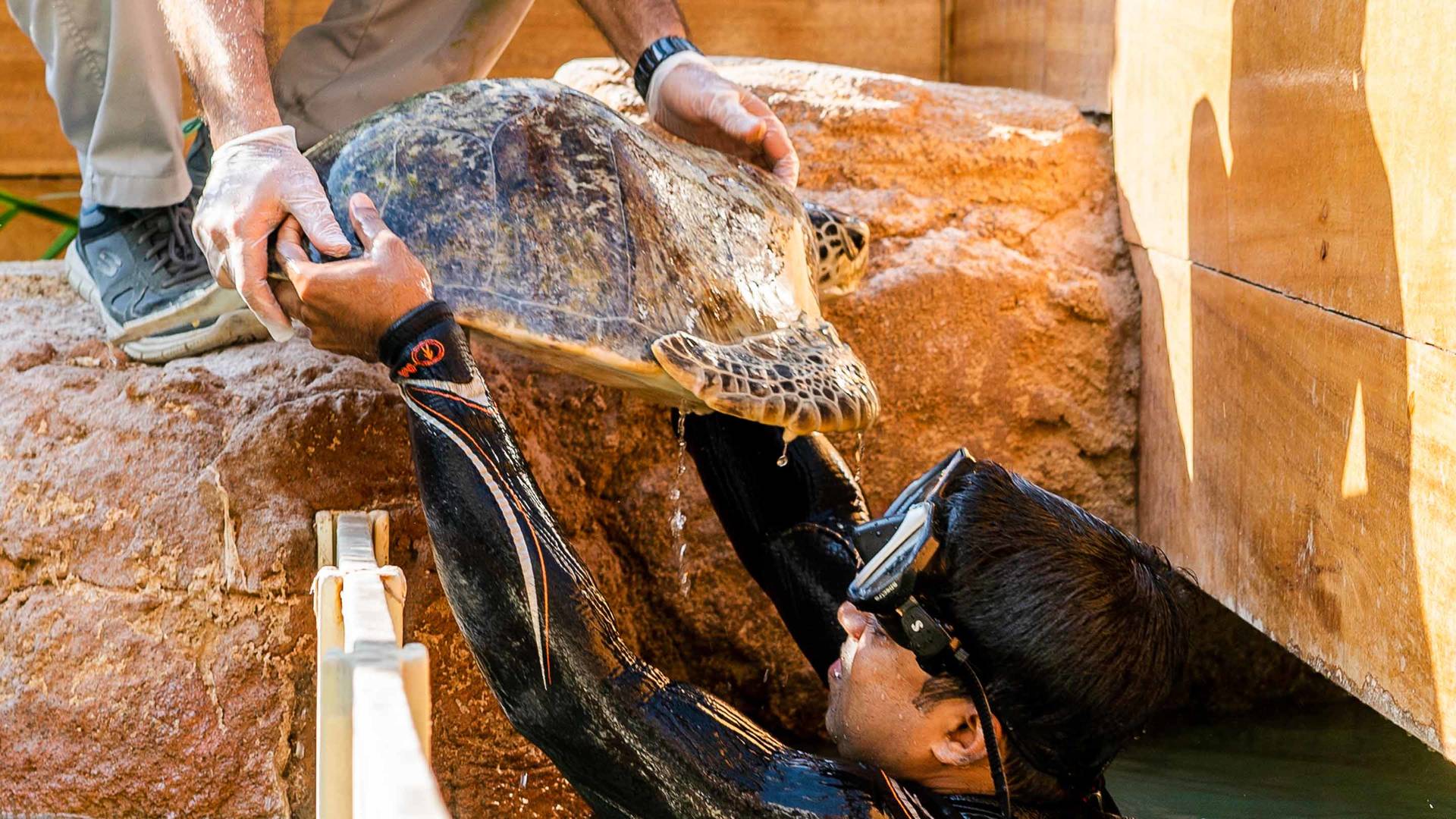