The Arabian Gulf’s shimmering waters are home to a number of protected species of sea turtles who glide through the sea in harmony with their surroundings and have earned celebrity status among the locals. Catching a rare glimpse of these graceful creatures in their element is a truly special encounter. Many turtles, however, are critically endangered: the narrow-beaked hawksbill turtle, the dominant species of turtle in the Arabian gulf found throughout the tropical waters of the Pacific, Atlantic, and Indian Oceans, has only an estimated 8,000 nesting females left worldwide.

As awareness of the importance of the natural world becomes increasingly clearer, and as plastic-free initiatives, such as Jumeirah’s ban on plastic straws, take the world by storm, our teams in Abu Dhabi and Dubai have been working hard to protect these magnificent and endangered animals and conserve their natural environment. Read on to discover how you can be a part of these conservation efforts across the United Arab Emirates. 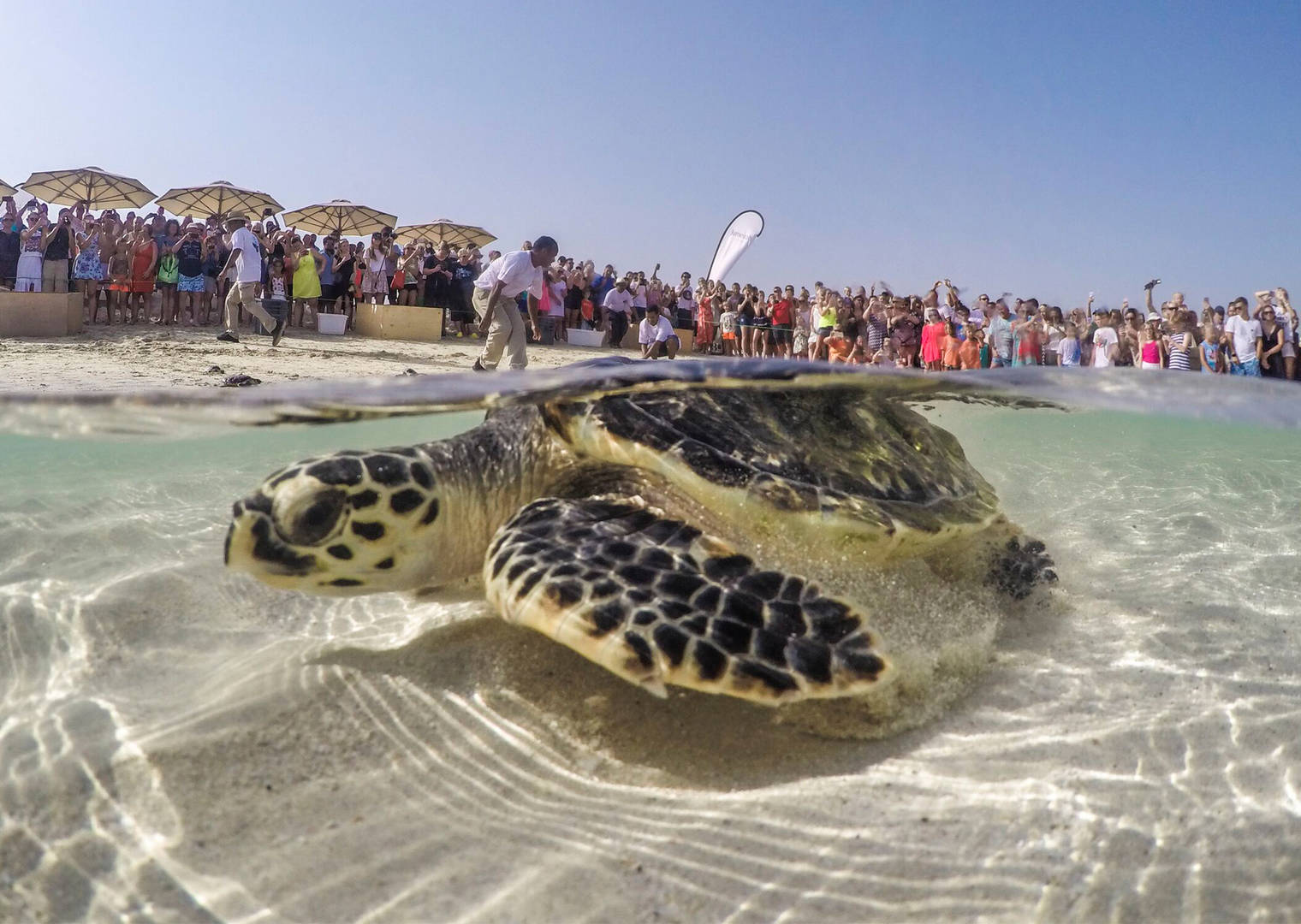 Famous for its sail-shaped silhouette, dazzling interiors and iconic location on Dubai’s shoreline, Burj Al Arab is also home to a world-renowned aquarium which is proud to be the headquarters of the Dubai Turtle Rehabilitation Project (DTRP), run in collaboration with Dubai’s Wildlife Protection Office, with essential veterinary support provided by the Dubai Falcon Hospital and the Central Veterinary Research Laboratory. The project was established in 2004 and since its launch the team has proudly returned over 2,000 turtles to the sea from all over the UAE.

The local community in Dubai are just as passionate as our teams and have become guardians of these elegant creatures. The turtles brought into our centre have been rescued by concerned members of the public or local conservation bodies. Turtles are cold-blooded creatures and gain their body heat from their surrounding environment. Young turtles in particular are affected by colder sea temperatures during the winter months from December through to February, which is when the majority of sick turtles are delivered to the rehabilitation centre. When a sick or injured turtle arrives, its condition is closely monitored by the team, who perform surgery and medicate the turtles where necessary. 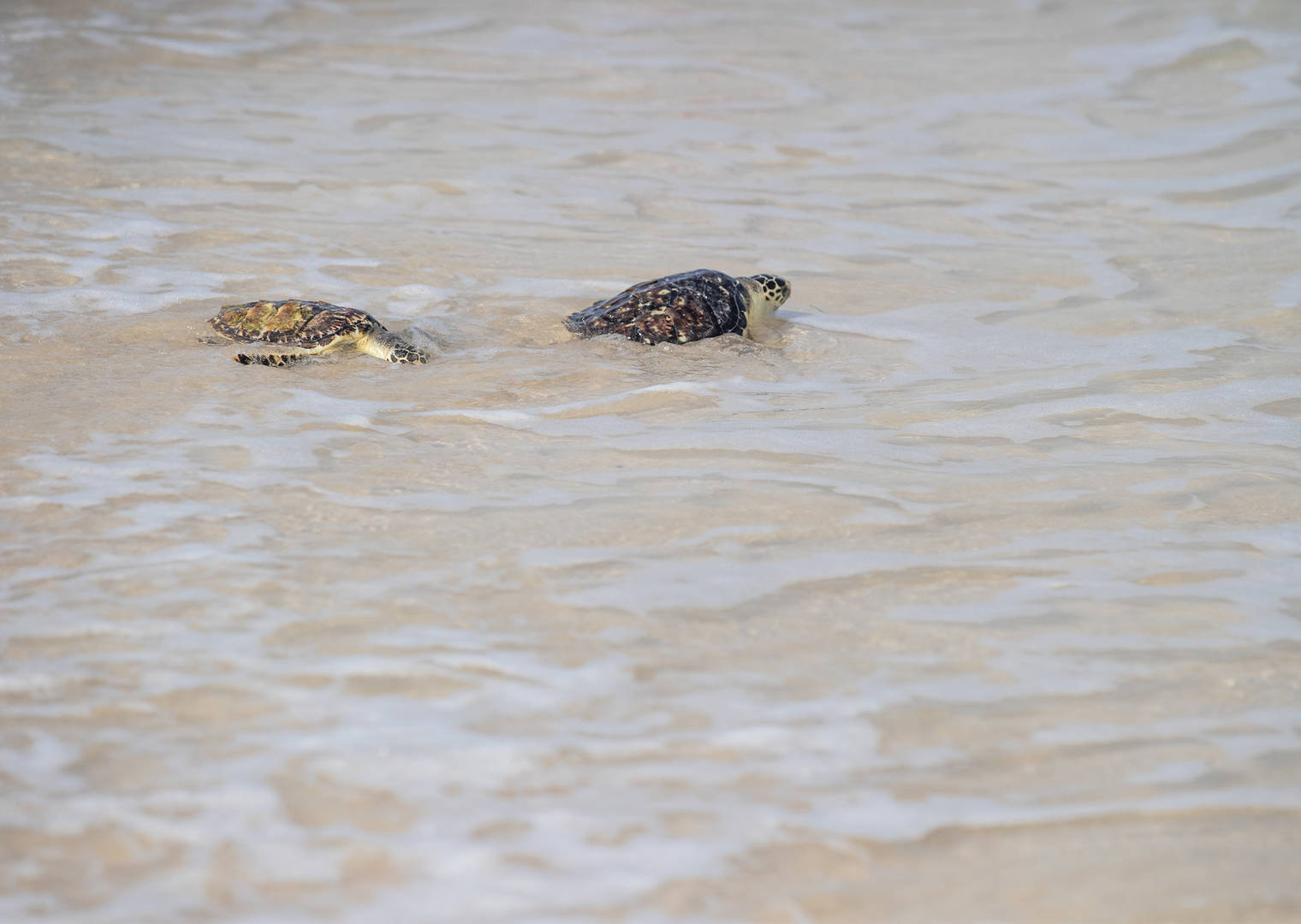 After recuperating in what could be considered one of the world’s most striking aquariums in Burj Al Arab, turtles are restored to their full health with more five star treatment at nearby Jumeirah Al Naseem’s Turtle Rehabilitation Sanctuary, where guests can chat to our aquarium team during feeding time and learn more about the turtles as they recover before being released back into the wild.

The new purpose-built lagoon is the region’s first and largest sea-fed turtle facility for rehabilitating critically endangered sea turtles. Five rehabilitation pens have been specially designed with unique overhangs, shade and water flow to enable the team to keep different groups of animals together during the process of recovery.

It takes around five months for small hawksbill turtles to return to their full strength before we release them back into the wild. Other species rescued by the programme include the larger green sea turtles and loggerhead sea turtles. Recently, we were delighted to rehabilitate a rare olive ridley sea turtle at the centre.

Jumeirah at Saadiyat Island Resort in neighbouring Abu Dhabi is a first of its kind in the region, built specifically to blend Jumeirah’s brand of luxury with more sustainable practices such as reusable products and toxic-free ingredients, plus take-home measures you can share with friends and loved ones. There are seven different turtle species around the world, one of them being the Hawksbill turtle, which can be found on the sands surrounding the resort, and our team works hard to protect its nesting sites and ensure that these beautiful creatures continue to flourish. Our in-house marine biologist is always on hand to offer educational sessions about the sea turtle and answer any questions guests may have about these truly magnificent creatures.
We invite you to get involved with our sea turtle conservation projects at Burj Al Arab and Jumeirah Al Naseem or step into a world of eco-conscious luxury with Jumeirah at Saadiyat Island Resort.